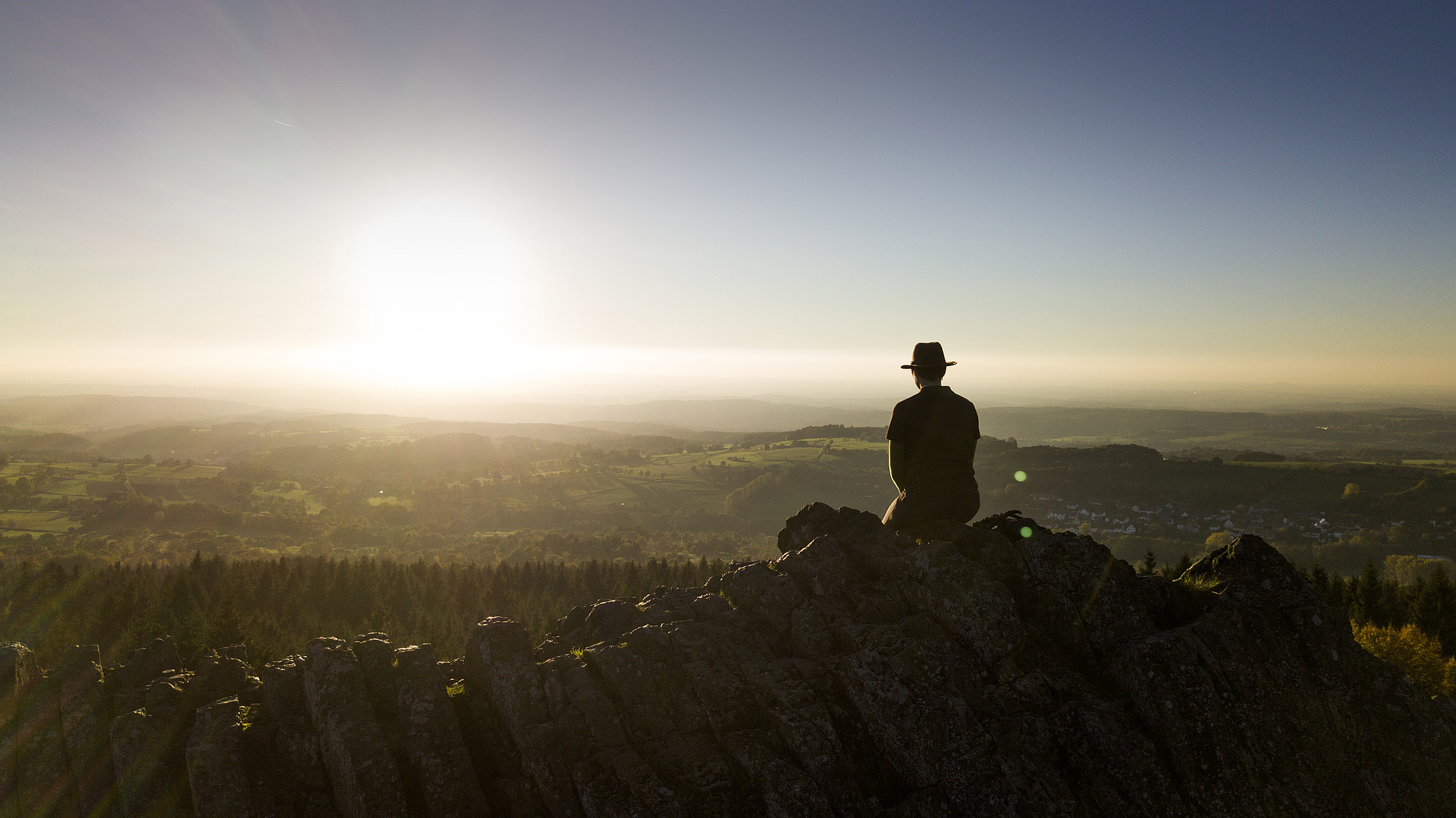 Hessen Agentur GmbH
The land and its people

Hiking on the volcano

The volcanoes in the Vogelsberg region of Central Hessen may have become extinct some 15 million years ago, but they’re more topical than ever. When you walk through the region, you can see traces of this fiery past at every turn.

What do Hawaii and the Vogelsberg have in common? Both regions have been shaped by volcanoes. The clear difference, however, is that the volcanoes on the Pacific island are still active, while those in Hessen are, thankfully, extinct. The last eruption in the Vogelsberg happened around 15 million years ago. Back then, violent eruptions caused huge streams of magma that were up to 80 kilometres deep and shaped the landscape of the Vogelsberg. The lava flows solidified to create enormous layers of basalt rock. Drilling in central Vogelsberg has found volcanic rocks reaching depths of up to 700 metres. Walkers and nature lovers can both benefit from this fiery past. The result is a highly varied landscape. Everywhere you look, you can find lumps of lava that were spat out by the volcano and now stand as peculiar rock formations that stand as tall as houses. Small boulders have been distributed far and wide throughout the forests, and some have been diligently collected to create dry stone walls to clear the meadows for farming. These dry walls have since become a habitat for hedge flora and are home to all kinds of creatures. The result is a colourful, patterned landscape with lots of small meadows. The Vogelsberg has been recognised as a landscape of national importance for its variety of mountain pastures, forests and semi-natural waters. The preservation of this cultural landscape is being promoted through a large-scale nature conservation project. And then there are the magnificent views, which you can enjoy again and again from the summits of the lava piles. The Taufstein projects 773 metres into the sky.

The highest town in Hessen

Around 50 information boards are distributed at geological points of interest across the Vogelberg to explain how the region was shaped. Eight of these geotopes are located around Ulrichstein. Andreas Rüb welcomes his guests there with a firm handshake. He’s the kind of walking guide who immediately lets you know you’re in good hands. He’s also a trained volcano guide, so he can answer almost any question about volcanoes and geology. Today he is taking his guests on the WeitblickTour, a magnificent four-hour walking trail offering stunning views of Ulrichstein. There is a geotope right at the beginning of the walk, where the Gilgbach stream ripples and gurgles. It is one of the many streams in the region; its pleasantly cool water snakes its way through the shaded valley between ancient trees and moss-covered basalt stones.

“People like to come up here when it gets warm in the cities below”, explains Rüb. “It’s always a few degrees cooler here than in Frankfurt”. The trail then leads you across fields and you soon begin to realise how the “stunning views” tour got its name. You can see for miles across the land, and Ulrichstein lies with its castle ruins on the magnificent vent of a former volcano. The small town is full of superlatives: It’s the highest town in Hessen; it launched the first community wind farm in Germany in 1996; and it’s home to Germany’s first natural bathing habitat – a natural swimming pool that doesn’t need any chemicals, as the plants act as natural filters.

The group continues to come across wonderful viewpoints andbasalt boulders like the “Dicke Steine”, another geotope and a lovely spot for a picnic. Suddenly, Rüb stops and listens intently. “Have you noticed anything?”, he asks his guests. “It’s completely silent here.” And he’s right. You can’t hear anything but the rustling of the forest. “We hardly ever hear aeroplanes here”, says Rüb.

At the end of the tour, the Schlossberg awaits – another literal highlight for the walkers. The castle ruins stand at 614 metres above sea level, offering views over the Hoher Vogelsberg nature reserve and as far as Fulda and Giessen. The Vogelsberg Garden lies at its feet. Across its small area, it gives visitors an indication of the diversity of the region’s flora and prevents rare plants from becoming extinct. The fruit varieties in the orchards have exotic-sounding names like “Amanlis butter pear”, “Danzig Kant apple” and “flamed cardinal”. A medicinal herb garden and cottage garden can be found nearby. You can take some seeds home with you in return for a small donation. Ulrichstein has several inns and lodges, and it’s also a stage in the 115-kilometre hiking trail known as the “Volcanic Ring”. It takes six days to complete and leads you around the Hohen Vogelsberg as you take in the region’s natural and cultural highlights. If you want to split the walk up into smaller parts, you can do it across three weekends. The Vogelsberg Vulkan Express runs during summer weekends and has a bike trailer, making arrival and departure by public transport an attractive option.