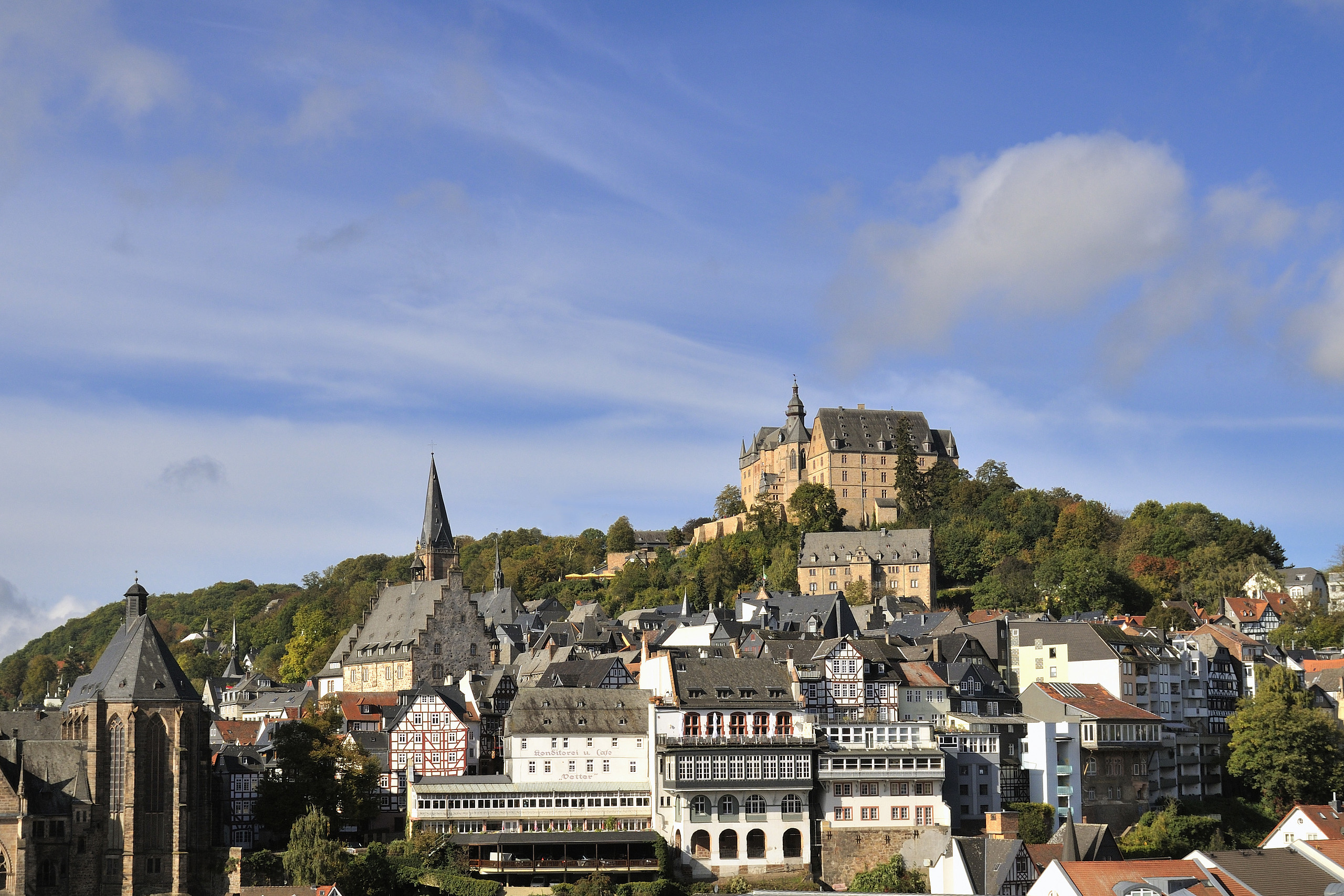 On a steep hill rising up from the river Lahn...

...this charming city is crowned by an imposing castle.

Situated midway between the cities of Frankfurt and Kassel, with a history stretching back over 800 years,  marburg is today a lively student city with a qUAINT medieval core.

The UNIVERSITY is the oldest protestant university in the world, founded in 1527. It boasts in its alumni Emil von Behring, the first ever winner of the Nobel Prize for Medicine. Brothers Jacob and Wilhelm Grimm, who collected many of their fairytales from around the region, also studied here, making the city a popular stop on the German Fairy Tale Road. A fairy tale trail through the city will lead you through its cobbled streets to all sorts of historical sights and quirky works of art.

The pedestrianised upper town, reachable by foot or using the free-to-use, glass-fronted lifts, is a charming network of winding streets and steep staircases lined with picturesque half-timbered buildings. The marketplace, home to a gorgeous 14th century town hall (Rathaus), is the city's heart and a popular hangout for students.

The magnificent castle (Marburger Schloss or Landgrafenschloss) was built as a fort in the 11th century but today houses the university's Museum for Cultural History (Museum für Kunst und Kulturgeschichte). On the other side of the historic botanical gardens (Botanischer Garten) stands St Elisabeth's Church (Elisabethkirche), one of Germany's oldest Gothic churches, complete with spectacular stained-glass windows.

MARBURG FOR THE VISUALLY IMPAIRED

Home to Germany's only academy for blind and partially sighted students for year five and up, Marburg is exceptionally friendly to visually impaired visitors. In addition to Braille city maps, tours for the blind and partially sighted and a specially adapted Planets Educational Trail, in which the solar system is depicted over the course of a 6km walk, are available. A number of restaurants in the city also offer Braille menus.

Marburg is well connected by train. An easy day trip from Frankfurt (Main) train station, direct services to Marburg (Lahn) take one hour on InterCity (IC) and Regional (RE and RB) trains.

The city can be reached from Frankfurt in just over 60 minutes, from Kassel in 90 minutes and from Giessen in just under 30 minutes.