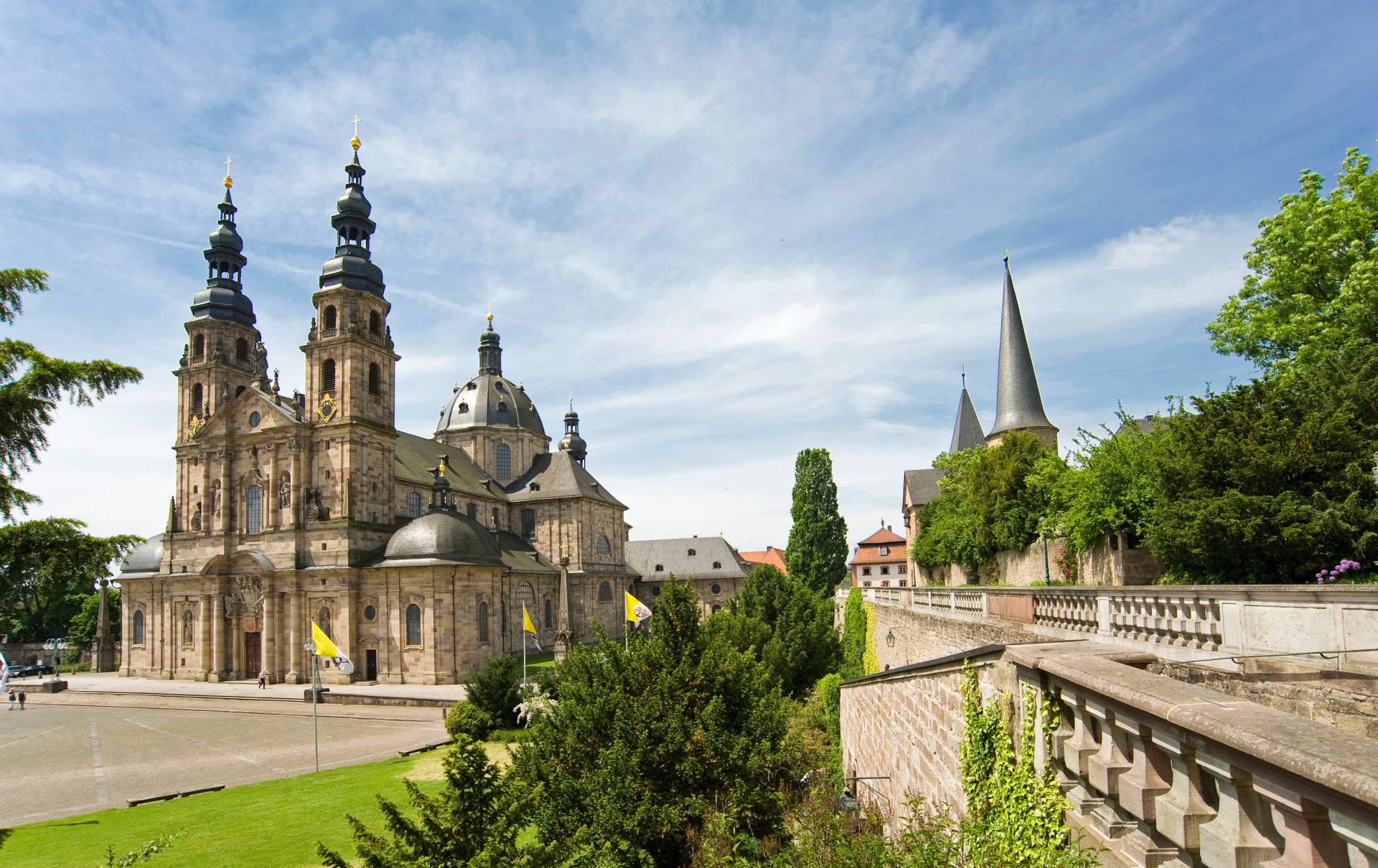 The Baroque city of Fulda...

...is a must-visit destination for lovers of lavish architecture, historic churches and religious artifacts.

Founded in 774 on the banks of the River Fulda, the city grew around a Benedictine monastery and today remains a diocese under the jurisdiction of a bishop.

With such a lengthy religious history, it boasts several impressive religious buildings. The early 18th century baroque cathedral (Fuldaer Dom) is home to a 9th century basilica and the tomb of St Boniface and remains a popular pilgrimage site as well as being an impressive location for organ recitals. St Michael's Church (Michaelskirche) is one of Germany's most significant medieval buildings and is widely considered to be the country's oldest Holy Sepulchre church, with a crypt dating back to the 700s.

Fulda's medieval old town retains parts of its wall and watch towers as well as numerous picturesque half-timbered houses. At the heart of the city's baroque quarter is the impressive city palace, the Fuldaer Stadtschloss, built at the start of the 18th century and home to elegant, 19th century state rooms and a museum housing a remarkable collection of locally made porcelain. Come summer, the palace theatre plays host to a festival of historical musicals. Just outside the city in the municipality of Eichenzell is the Fasanerie Palace, another beautiful 18th century palace with sumptuously furnished rooms and impressive paintings. Stop here for a coffee on the terrace and enjoy the palace's beautiful gardens.

Gorgeous green spaces are an ongoing theme here: Fulda is also well known for its parks and gardens. Highlights include the Dahlia Garden (Dahliengarten), just opposite the cathedral square, where 30 different varieties of the flower bloom in late summer. The rose garden at the entrance to the cathedral's museum (Domdechaneigarten) contains a striking mix of historic rose varieties growing among archaeological exhibits from the lapidarium.

There's more to the city than its impressive buildings and greenery, however. The city is fantastic for shopping, whether for clothes at one of the many independent boutiques or chain stores or for local culinary specialties at the bustling farmers' market at Gemüsemarkt square. To keep your energy up mid-shop, stop in at one of the city's many street cafes or restaurants, and end your day with a glass of something cold and refreshing in a traditional local pub.

Fulda's train station (Bahnhof Fulda) is an important junction for long-distance trains. It is served by plentiful InterCity Express (ICE), EuroCity (EC) and regional (RB and RE) services. There are frequent connections to both Frankfurt (Main) train station (duration: 60 minutes with the ICE) and Frankfurt (Main) Airport as well as other major cities in Hessen and the rest of Germany.

The journey from Frankfurt to Fulda takes around one hour and twenty minutes.

With a pedestrianised centre the city is compact and walkable, however local buses do run from the train station, from where taxis are also available.