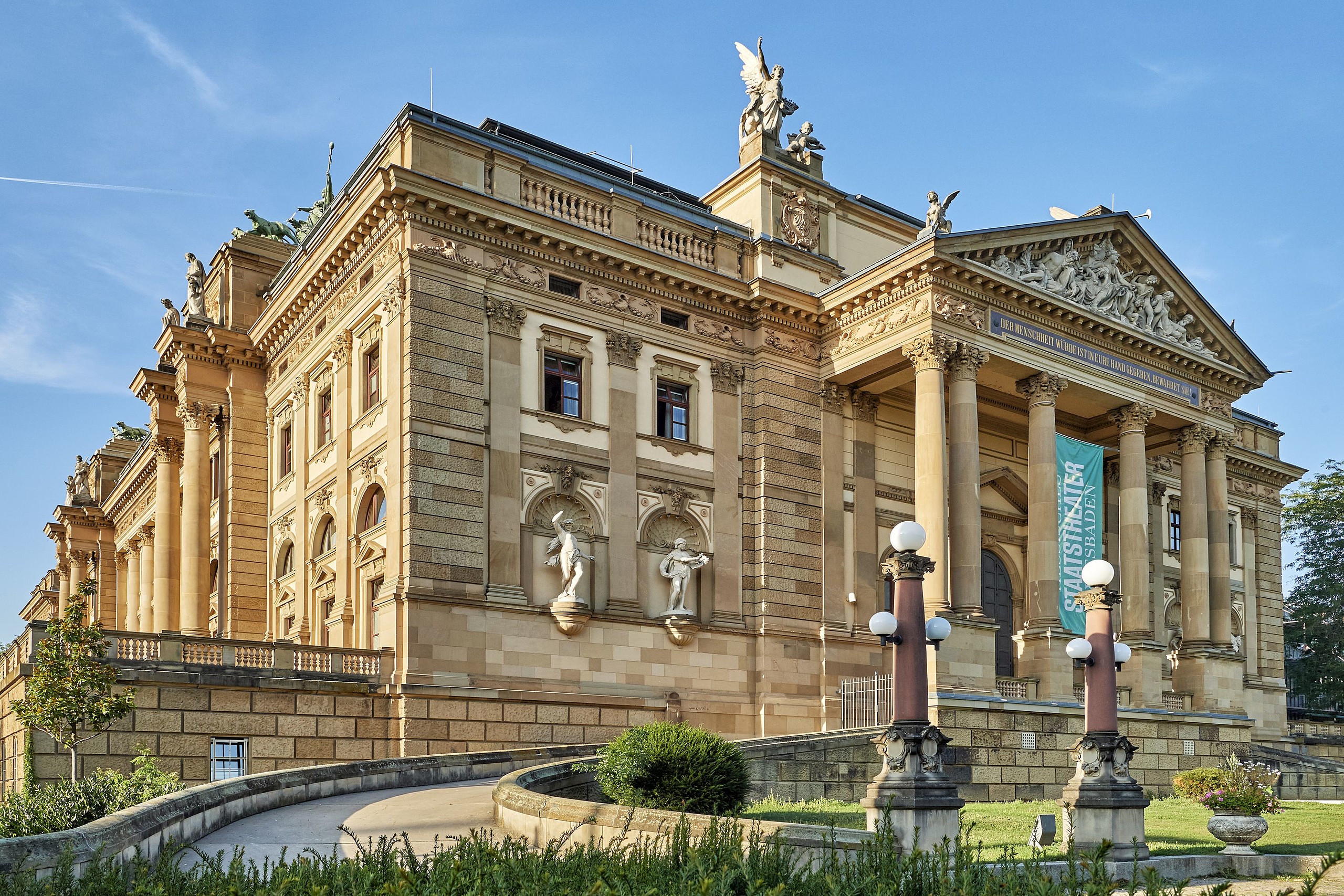 At the heart of the Rheingau wine region...

LOCATED HALF AN HOUR FROM FRANKFURT AIRPORT BY RAIL OR ROAD, THE STATE CAPITAL OF WIESBADEN IS ONE OF THE OLDEST SPA TOWNS IN EUROPE, FAMOUS FOR ITS HOT SPRINGS SINCE ROMAN TIMES.

The city gained international fame as an exclusive spa resort in the 19th century. Today, with 14 of its original 26 HOT SPRINGS remaining, visitors continue to relax and recuperate at spa hotels and complexes around the city. Built on the site of an ancient Roman baths, the Art Nouveau Kaiser-Friedrich Baths (Kaiser-Friedrich-Therme) offers a wide range of steam and sauna options. The wellness amenities at the Aukammtal Thermal Baths (Thermalbad Aukammtal) include a fire sauna and an connected indoor-outdoor pool.

Wiesbaden's CULTURAL AND CULINARY OFFERINGS are equally impressive. The internationally-acclaimed annual International May and Rheingau Music festivals (Internationale Maifestspiele Wiesbaden and Rheingau Musik Festival) provide visitors with a vast choice of theatrical, operatic, classical musical and ballet performances. Every August at the Rheingau Wine Festival (Rheingauer Weinwoche) over 100 wineries from around the region offer their wines in the city's central cobbled squares. During Advent, this is where you'll find the festive wooden huts and twinkling lights of the Shooting Star Christmas market (Sternschnuppenmarkt).

Those who enjoy a spot of luxury SHOPPING should head to the elegant Wilhelmstrasse, a wide boulevard lined with galleries and exclusive boutiques. Literary fans won't want to miss the neoclassical Kurhaus casino, which inspired the Russian novelist Fyodor Dostoevky's novel The Gambler. Whether you come for Michelin-starred fine dining, the International Horse Show (Pfingstturnier) at the stunning Baroque Biebrich Palace(Schloss Biebrich), or a relaxing weekend luxuriating in the city's thermal baths and lush green spaces, Wiesbaden will show you how to do it in style.

Wiesbaden is served by a number of high-speed InterCity (IC) and InterCity Express (ICE) as well as regional (RB and S-Bahn) trains. The S8 and S9 trains connect the city with Frankfurt Airport, journey time around 30 minutes. Both trains, plus the S1 and a regional (RE) service, also provide connections with Frankfurt (Main) train station.

Journey time from from Frankfurt (Main) Airport is approximately 25 minutes, and 35 minutes from the city of Frankfurt itself.

The city has a large pedestrianised centre that is easily reached from the train station by bus or foot.

Wetzlar's HISTORICAL OLD TOWN is the heart of the city and where you'll find its museums and main sights. These include Wetzlar Cathedral (Wetzlarer Dom or Dom Unserer Lieben Frau), which was begun in 1230 and is a striking - unfinished - mixture of Romanesque, Baroque and Gothic architecture. The city also boasts a remarkable collection of carefully-preserved and restored half-timbered houses. Noteworthy buildings include Zur Alten Münz, a half-timbered building constructed in 1599 on the site of a medieval mint, and the house at Brodschirm 6, Wetzlar's oldest half-timbered structure, which dates back to 1356. The old town is surrounded by five pretty parks that run parallel to the path of the former old town wall, sections of which still remain today.

The city also has a significant LITERARY HISTORY. It was here that in the summer of 1772, Johann Wolfgang von Goethe was inspired to write one of his most famous works, "The Sorrows of Young Werther". Built in 1653, the Lottehaus, once the home of Charlotte Buff, the object of Goethe's unrequited affections, is today a museum that has a permanent exhibition dedicated to his work.